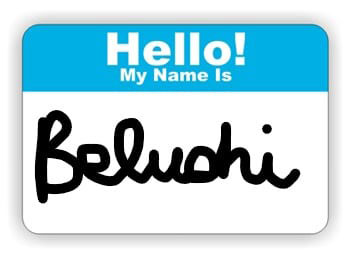 Last month, the Trademark Trial and Appeal Board (“TTAB” or “Board”) issued a precedential decision, affirming the Trademark Office’s refusal of registration for BELUSHI’S for “travel  reservations” and related services and “hotel…restaurant and catering services” and related services” on grounds that the mark is “primarily merely a surname.” Although the Board admitted in this case the surname is rare, it found that given the celebrity of John and Jim Belushi, consumers would recognize the mark as a surname.  In this particular case, only five people in the United States are named BELUSHI confirming that the term is exceedingly rare.  However, the Board affirmed the refusal of registration despite the rarity of the surname because purchasers in this case would “immediately recognize it as a surname.”  In other words, the BELUSHI name is not rare when considered in terms of its exposure “as a surname, the Board held.

The status of the law

Section 2(e)(4) of the Trademark Act and the various cases interpreting this Section are clear that absent a showing of acquired distinctiveness, terms that function “primarily merely as a surname” shall be rejected.  The primary significance to the purchasing public determines whether the mark is primarily merely a surname.  In addition, the cases set forth a number of factors to help Trademark Examiners and Applicants determine whether a term is “merely a surname”:  (i) whether the surname is a rare; (ii) whether anyone connected with the Applicant uses the term as a surname(if the term identifies a historical figure, the term may not be merely a surname); (iii) whether the term has recognized meaning other than a surname; and (iv) whether the term has the look and feel of a surname.

Application to other decisions

The Trademark Office has recently rejected many surname trademark applications and in the past year issued a number of precedential decisions regarding this hotly argued area of the law. Although rare surnames in the past have generally tipped the scales in an applicant’s favor, in recent decisions issued in 2016 this was not the case.  ALDECOA was found to be primarily merely a surname for “coffee.”  In that case, although the name was found rare, there was no other meaning found for the mark and there was a “strong connection” between the surname and the mark owners.  Moreover, the Board’s finding was motivated largely based on how the owners and the , which although admittedly rare, based on how the surname was used on the product labels (ALDECOA Premium Family Coffee) which indicated the mark was a surname.

In trying to register BARR GROUP for engineering, training, and expert witness services in the field of computer hardware and software” the Board rejected the mark as primarily merely a surname, finding that the BARR surname is not rare, and given Michael Barr’s status as co-founder and Chief Technology Officer of the company, consumers would recognize the mark as a surname.  In combining the BARR name with GROUP, with Board held that GROUP does not lend any source identifying significance to the mark, enabling the term to be recognized as anything more than primarily merely a surname.

Although these decisions seem to indicate a tougher stance by the  Trademark Office recently in accepting surnames for application on the Principal Register, we note that through the years, the Trademark Office’s examination procedures have changed.  For instance, in 1906, when CARTER’S for various clothing items was filed by the William Carter Company (a brand that was named for him), there was not requirement to file for acquired distinctiveness.  Similarly, in the 1920’s when WRIGLEY’S first began to file its trademark for chewing gum, no surname refusal or showing of required distinctiveness was required.  Even in 2013, when Mott’s, one of America’s best loved brands in use for fruit juices and sauces for more than 150 years, attempted to branch out into baby food, its application was refused on primarily merely a surname grounds without a showing of acquired distinctiveness.

How do I get my surname registered?

We can help advise you if you have a trademark application that contains a surname.  Remember, the most distinctive trademarks are those marks that are fanciful or coined terms.  For instance, if your last name is “Conway” and you’re in the telecommunications business, your mark might be CONTEL.

When all else fails, remember so long as you are using the mark in connection with the applied for goods in interstate commerce, the trademark is eligible for protection on the Supplemental Trademark Register as a descriptive trademark until the mark has “acquired distinctiveness.”

If you have any questions about this case or any trademark application you would like to file, please contact us.